Back in January, Dorna announced that number 69 would be retired from racing, as a mark of respect for the late, 2006 MotoGP champion.

Nicky Hayden spent his entire career – from grassroots series, all the way up to MotoGP – riding under this number.

Dorna CEO, Carmelo Ezpeleta, stated at the ceremony that “Since the beginning, after we lost him, we thought it’s something we must do. Nicky was something special for all us, his behavior was really fantastic.”

“Nicky had a lot of success on track, but I think we all agree he made just as big an impact off the track and everyone’s lives – whether friends, family or fans. That’s something we are most proud of.”
– Tommy Hayden 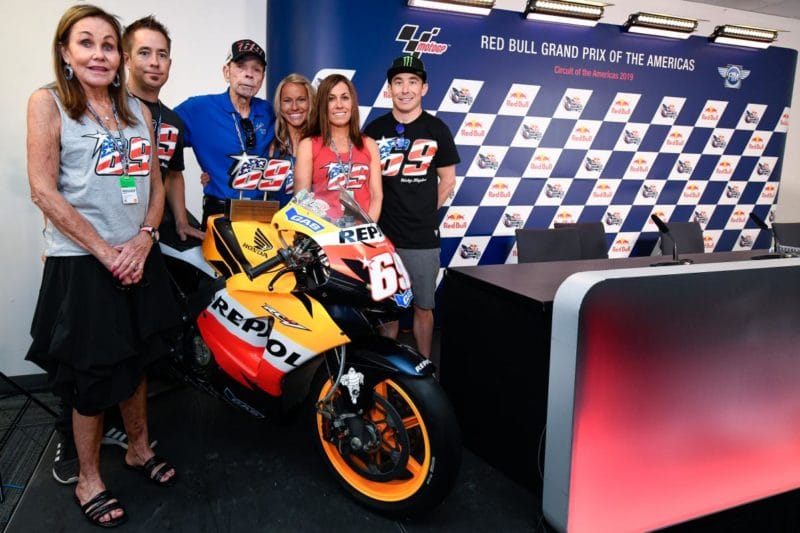 Further to the official ceremony, Hayden’s 2006 championship winning bike was on display for fans at COTA’s turn 18. This part of the track has been affectionately renamed “Hayden Hill”.

This ceremony comes after Nicky was inducted into the Motorcycle Hall of Fame in 2018.

Who is Nicky Hayden? A look back at his career…

Joining MotoGP in 2003, Hayden burst on to the scene with his fun-loving attitude, joking nature and, most importantly, serious speed!

In his first season, Nicky was invited to join leading team Repsol Honda, to ride alongside reigning world champion, Valentino Rossi. He finished fifth in the championship and, thanks to impressive performances, secured the title of “Rookie of the Year”. He then landed his first race win at the Laguna Seca GP in 2005.

Then, in 2006, came Hayden’s finest year as he ended his team-mates 5-year-long streak of Championship titles. He led the way for much of the season – taking command of the standings after only the third race. However, he was forced to fight back after an incident with Dani Pedrosa, at the penultimate race, left him eight points behind Rossi. 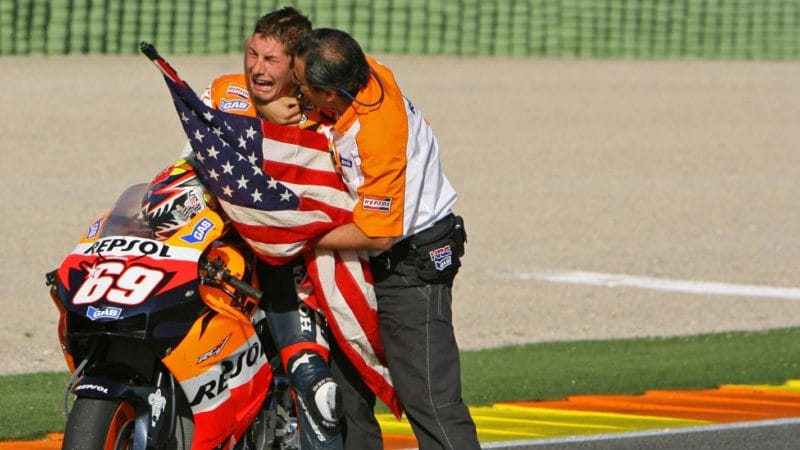 Moments after crossing the line and securing the 2006 title. (Credit: MotoGP.com)

Two further years with Repsol Honda were followed by five, sadly unsuccessful season with Ducati before he finished his MotoGP career with two years at Honda Aspar.

Making the switch to join World Superbikes for the 2016 season saw Nicky quickly return to his winning ways on the Red Bull Honda machine. He finished fifth in the championship after securing a brilliant win at the Malaysian GP and three additional podium finishes.

On the 17th of May 2017, Nicky was training in Italy after the recent Italian GP. He was hit by a car whilst cycling and suffered a traumatic brain injury. He died in hospital, five days later, aged 35.

Why did Nicky choose number 69?

Despite its connotations, Nicky, in fact, chose the number as it had been used by his father, Earl Hayden, who was also a racer. It was previously used by both of his brothers, during their own careers. This then allowed them the option to use each other’s machines if one happened to break down during a weekend of racing – so rumour says.

It is said that Earl originally chose the number after crashing a lot, stating that people could still read the number, even if the bike was upside down.

Nicky spent just one year without the number 69 on the front of his bike. In 2017, after winning the MotoGP World Championship, he traded it for number 1.

Who else has ridden under the number 69?